In an effort not to limit my capabilities with the keyer's software, I wanted to make sure whatever prototype I eventually built could double as a development board. To that end, I implemented all optional components of the SpiffChorder circuit (programming header, LEDs, pull-up resistors and screw terminals for all 8 chord keys and 3 modifier keys). I tried to keep the layout as compact as possible while still working on single-sided pad-per-hole perfboard, using entirely right-angle traces so as not to make stray contact with corners of square pads. It fits in a 17x21-hole grid including a ground bus all the way around the perimeter. Here's a top-down view showing the logical supply, ground and signal paths colored for easy identification, the front showing just silkscreen markings and jumpers, and one with the traces on the back (mirrored for easier visual reference). 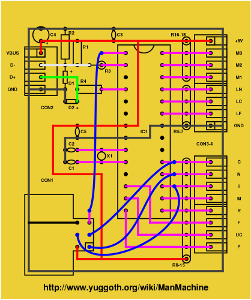 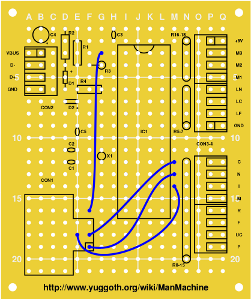 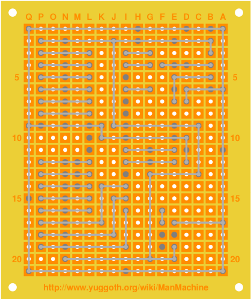 A revised Digikey bill of materials including all the parts I used:

I initially sketched the layout on graph paper and transferred it into Dia by hand. Here's the multi-layer original from which the above graphics were exported. Installing all those tiny traces without accidentally shorting any together was painfully time-consuming. This is designed assuming a keyed through-hole 2x3 right-angle shrouded header of the correct size for the USBtinyISP AVR Programmer (CON1), and 5x 0.1" pitch through-hole 4-line right-angle screw terminals (these take a 1.8mm jeweler's screwdriver) to connect leads for all the switches, LEDs and USB (CON2-4). 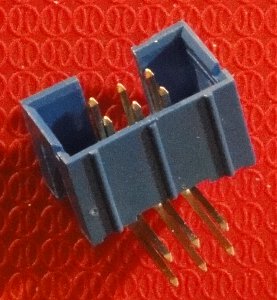 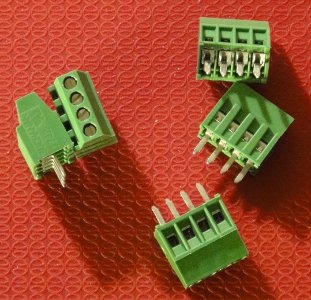 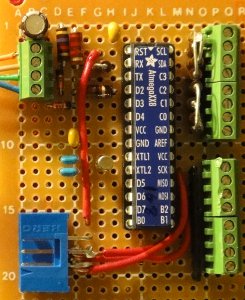 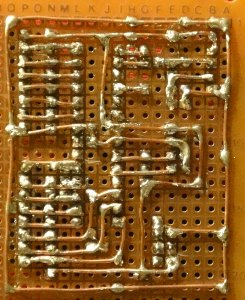 You'll notice this layout uses an 8-resistor array instead of Greg Priest-Dorman's 9x (to save on space). I also show couple of 3-resistor arrays (R5-7, R16-18)... Digikey has no such beast, but I bussed individual resistors mounted vertically by soldering the common leads together above the board (only passing one of the three through the board).