This two-layer development board was laid out using Fritzing, and an order has been placed to Fritzing Fab for a prototype to QA. Fabrication cost for one unit, including international shipping to the USA, was roughly US$40. I'll post pictures once it arrives in a couple weeks and I have a chance to run tests, but here are some preliminary details:

So far I'm using the same BoM from the perfboard design, but I'll probably switch up CON1 with Digikey part 609-2845-ND (vertical rather than right-angle) so as not to block the lower-left mounting hole. Here's a paper test using a 1:1 scale printout of the silkscreen and solder mask together: 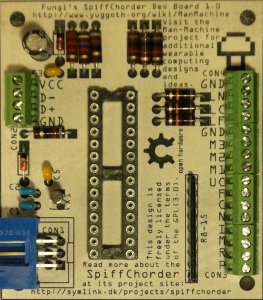 Also, the 0.1" pitch right-angle screw terminal blocks I used are just slightly longer than 0.4", so I lightly sanded down the facing sides for CON3-4 until they fit snugly but evenly in a piece of perfboard and then attached them to one another with a tiny dab of quick-setting adhesive gel (being careful not to get it into the terminals themselves):

back to The Man-Machine...